So, I suppose you have downloaded and installed the latest version of Plug'n Script (upon purchase you get your download link), it installs as any regular plugin. If you haven't purchased it yet, there's a demo version on the site which will be just fine to try it out (except for some limitations).

No matter, what version you install, it'll be able to produce VST, VST3, and AAX for both platforms (Windows and Mac), as well as AU for Mac. I use Win x64 VST3 version, because VST3 supports sidechaining and resizing in Cubase.

There's also a standalone Plug'n Script application that you can use if you want to process audio directly from and to your soundcard, but we'll talk about the plugin version mostly.

After installation you'll see two versions of the plugin:

When you insert Plug'n Script on track and open the plugin, you'll probably see something like that: 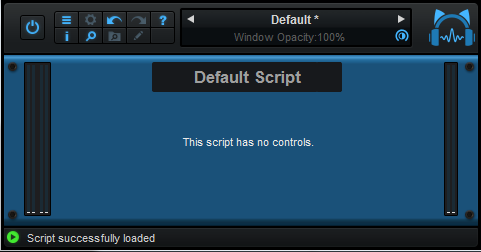 From here you can try different factory presets. 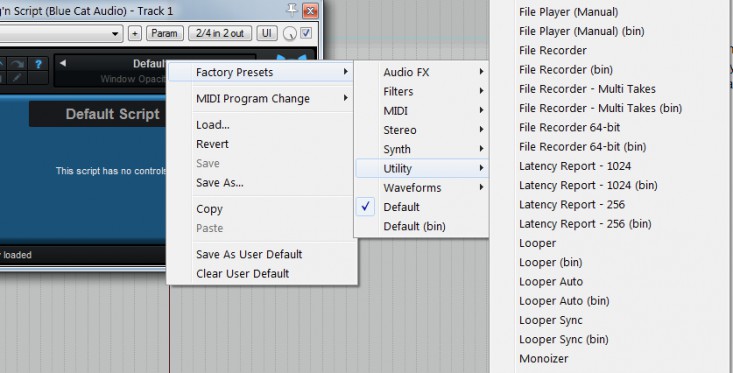 A preset contains information about which script file to use, as well as pre-saved script parameters and what skin parameters to use (how the plugin looks). So when you list presets you can see your skin sometimes changes color and knobs.

You'll see that almost all presets have a (bin) version. It means that it uses binary (compiled C++) code instead of AngelScript. So if you would use factory scripts in your music project, you might choose "binary" versions, cause they will run faster.

However, we usually get Plug'n Script to make our own scripts, so binary versions don't get much attention, cause you can't easily edit them. I choose to delete them to make PnS menu listings twice smaller.

If you want to start editing the script, click the "Edit Mode" button. You'll see the "edition" pane with several options:

If you now click on the "Edit Script" button, your text editor will open with the code of the current script.

You can select which editor application to use, clicking on the "Open edition preferences".

However, If you now try editing factory scripts you'll probably get an error, cause they are located in the "read-only" folder. So before editing them, you should save them to another location. For that click on script name and select "Save script as...". 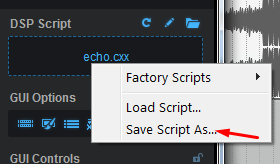 By default, scripts are saved into ~\Documents\Blue Cat Audio\Blue Cat's Plug'n Script\Scripts which is a good place, cause you'll see them in the dropdown list and be able to load easily.

I've saved "my delay" script into the subfolder "My scripts" inside that folder, and now I can easily load it from the menu:

Be aware that some scripts use "includes" from other locations, like that "echo" script.
If you edit it, you'll see the line:

So if you get an error trying to load it, you should check, is there such file in your path. For example that "library" folder is present in "~\Documents\Blue Cat Audio\Blue Cat's Plug'n Script\Scripts" so if you save your script to "~\Blue Cat's Plug'n Script\Scripts\My Scripts\myscript.cxx" it'll work fine. If you save it directly to "Scripts" folder you'll have to correct the include path to:

Hopefully, it makes sense, especially if you've ever done any programming before.

Now you can click "edit script" and you'll see the DSP code.

There are a lot of functions that we'll cover later, but for now, let's try to do some simple changes and save the script.

Save the script and now hit the "Reload Script" button in "Plug'n Script".

If all was successful, you'll see the changes.

Congratulations! Now you're ready to write your first script!