Such frameworks like JUCE, iPlug/WDL-OL require you to write in C++. And if you're not familiar with this language, it can be a rather steep learning curve. If you just want to try something simple, you'll probably search for something else.

Plug'n Script also lets you write DSP code in C++ if you want, but the basic idea is that you don't have to use C++. You can write very short and elegant scripts using AngelScript language, which performs quite well and compiles on the fly. And you can edit and reload these scripts without leaving your DAW.

So Plug'n Script is mostly a sandbox, not a serious tool?

Well, if you want, it can become quite serious. When you finish your script in AngelScript you can port it to C++ using the same simple and unified API. So your compiled code will run as fast as any other plugin. You can export it in any popular format (VST, VST3, AAX, AU) and it will work as a standalone plugin that you can sell or share.

What about the GUI?

You can save a lot of time here, cause the GUI can be auto-generated from your DSP script params.

If you use the default skin, your plugin will look similar to other Blue Cat Audio plugins. However, you can quite easily ​customize the main (central) part of your GUI. 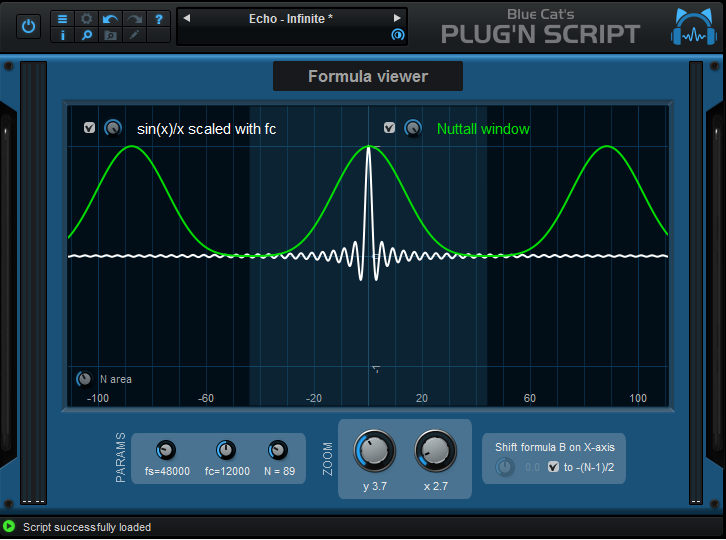 If you want to go further, you can build ​your own skin from scratch (which takes some time), or you can try third-party custom skins, like highly customizable LM Skin.

Does it require me to know programming?

Yes, it does. AngelScript is very similar to many other languages, KUIML for GUI is similar to HTML, so if you've ever developed a site or did any other programming you'll feel quite comfortable quickly.

How can I start?

You can download Plug'n Script demo from Blue Cat Audio site. In the manual for the plugin you can get a lot of information on how to get started.

However, there's a lot more than in the official manual, and a lot of tricks should be revealed and explained. That's why this site was started as an attempt to make a nice and convenient tutorial about modern Plug'n Script and it's possibilities. Hopefully, it'll become a place to share examples, tips and tricks on how to use it.

Continue to the Plug'n Script tutorial